Sienna Miller and her GI Joe: The Rise of Cobra costars are continuing to take their film around the world, attending the movie's Japan premiere in Tokyo yesterday. While Channing Tatum took his wife Jenna Dewan as his premiere buddy, Sienna walked the red carpet with her sister, Savannah, wearing a Gucci leopard sequin suit: do you love it or hate it? Sienna's hoping GI Joe will help raise her box office credibility, having told Nylon: 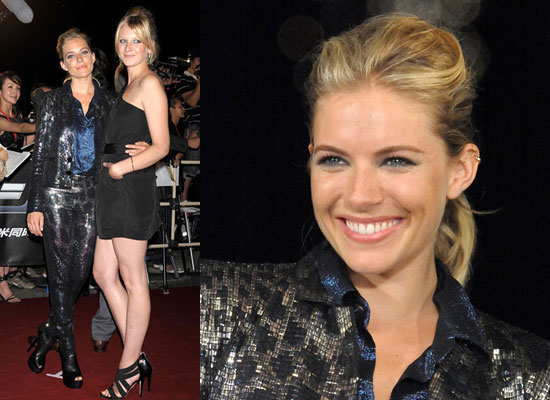 "It’s really exciting to be in a film that people actually want to go and see! I was having to pay people to see my movies!... certain really great directors have wanted to do films with me, but unless you’ve had a film that’s opened with a certain amount of money, you’re not bankable to studios… if you want to make amazing, artistic films, you’ve got to have some sort of box office credibility, which I don’t have."

Do you think Sienna's box office credibility will increase thanks to this movie?