Sienna Miller matched her lips to her bright red dress at The Cinema Society and Links of London screening of Mysteries of Pittsburgh in New York City last night. She smiled alongside Peter Sarsgaard, with whom she stars in the film — check out the trailer after the jump. As well as big screen projects, Sienna's getting ready to tread the boards on Broadway in September in Peter Marber's version of After Miss Julie. She's been speaking about the prospect of acting on stage, saying: "I'm scared obviously but really excited. Patrick Marber is, I think, one of the most fantastic writers. If you want to be an actress you think about opening on Broadway." Peter made his Broadway debut last year and was happy to share tips with Sienna, suggesting she get massages between performances. Sounds like good advice! 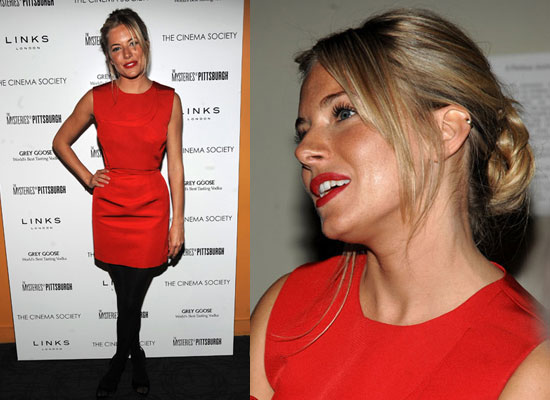 To see more pictures of Sienna with Peter, plus the film trailer, just read more.