Following his appearance at Elton John's Oscars party, Simon Cowell appeared on The Tonight Show with Jay Leno last night and coyly discussed his relationship with makeup artist Mezhgan Hussainy. Simon expressed his thoughts on having children — reiterating what he said on Piers Morgan's show — saying with a smirk: "I'm kind of torn because I'm a bit too old to have kids, but then again I think it would be important to have a lot of me's around in the future." Jay brought Mezhgan onto the show, and also asked if they were engaged. He said: 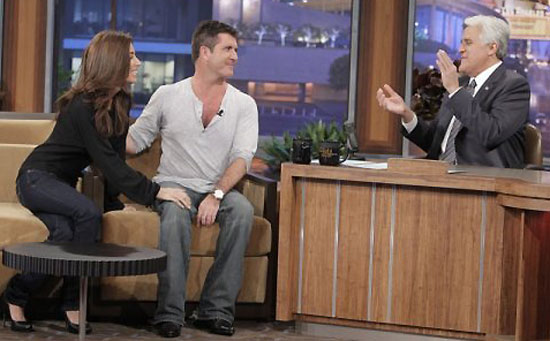 "Are they true? Well, I do have somebody in my life now, Jay, yes. And I kinda made a decision this year to make somebody happy."

Jay then asked when they'd got engaged, and Simon said, "I find this very uncomfortable. I was asleep, I think. No, look, I bought her the ring in London." Simon went on to suggest that Jay could be a flower girl at his wedding, and said that he'd like to get married in "the next ten years". Do you think Simon's going to tie the knot in the near future?