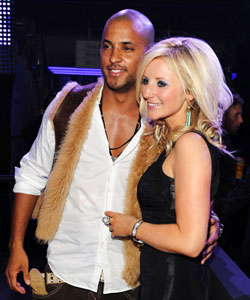 "Carley Stenson and Ricky Whittle have announced their decision to separate. The pair remain good friends but do not wish to comment any further."

Ricky recently revealed Carley was his "biggest critic" for dancing, and she watched the live shows. He dismissed suggestions of jealousy over his relationship with professional dance partner Natalie Lowe, and sources claim Ricky's alleged infidelity last December led to the split.