Music industry artists and insiders including Take That, Girls Aloud, Mika, Sophie Ellis-Bextor, Sugababes, Simon Cowell, The Feeling and many more honoured Lucian Grainge, a Universal Music boss, at a hotel in London last night as Lucian Grainge picked up the Music Industry Trust Award last night. It was a fab photo opportunity for the biggest boyband and girlband in the UK (minus Nadine) to get photographed together, making me imagine what an awesome supergroup they'd be! U2 presented the award to Lucian, with Bono saying: 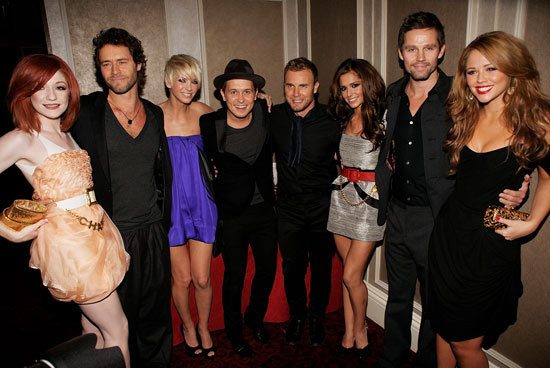 "He's great because he's ready to take on the world for British music, and Irish music for that matter. He's a tough guy when it comes to deals but he's a very tender soul to deal with if you're U2."

The event also took advantage of the moneyed guestlist, raising more than £568,000 for charities!

To see many more photos of the guests, just read more.