Taylor Lautner hung out with Rob Lowe (who's just announced he's leaving Brothers and Sisters) and other stars to watch the New York Jets play the Indianapolis Colts in the AFC Championship at Lucas Oil Stadium in Indianapolis on Sunday, after manning the phones at George Clooney's Haiti telethon in Los Angeles on Friday night. The Twilight star has plenty of new projects in the pipeline, and we'll get to see him on the big screen next month when Valentine's Day is released: will you see it or skip it? Now Taylor's split from his on-screen love in that film Taylor Swift, he says he's happily single, and with his 18th birthday coming up on 11 Feb. I'm sure he'll have no lack of offers should he want a special birthday kiss. 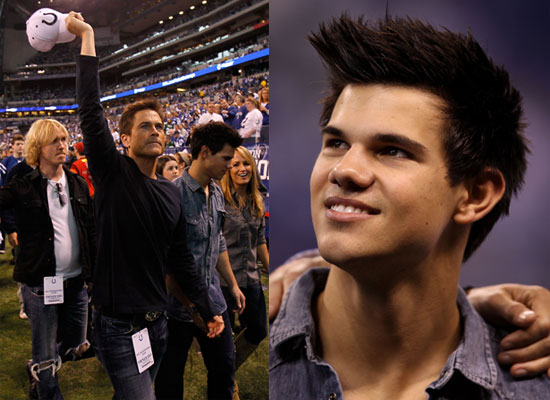