Taylor Swift wore a cute layered outfit as she left her London hotel yesterday, and then made several costume changes during her show at Wembley last night, which included smoke effects and rain! She missed out on picking up all her American Music Awards on Sunday because of her commitments in the UK, where she's been appearing on TV shows and meeting her many fans. She even donated £13,000 to Children In Need on Friday, and has also been made into a doll, just like the Twilight characters. Speculation continues about Taylor's relationship with Taylor Lautner, and he was quizzed by Jimmy Kimmel about it, but he kept quiet: check out video of the interview with Taylor, Robert and Kristen after the jump. 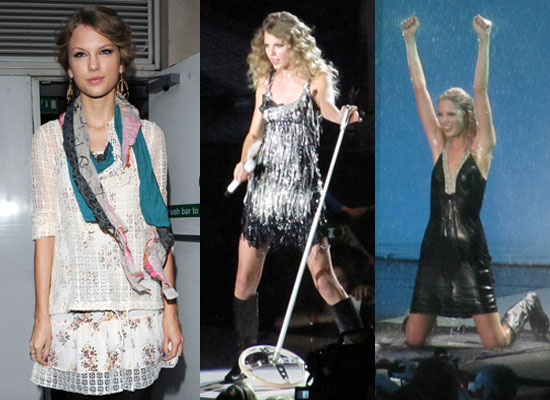 To see loads more pictures of Taylor in all her tour costumes, and watch Taylor Lautner squirming when Jimmy Kimmel asked about their relationship, just read more.