The Beckhams spent the weekend in Milan, where David officially signed up for his short loan to AC Milan at the San Siro Stadium. Victoria confirmed she'll stay in LA so the kids can stay in school, but said they'll visit as much as they can, adding: "We're very, very excited." David looked all kinds of cute in his various outfits, whether he was casual in a beanie or sunnies for his medical, or dressed up smart in his suit and favourite brown shoes for a meal at Giannino. As my girl FabUK has noted, Victoria spotted an opportunity for a little self promotion and wore three of her outfits within fifteen hours! She also hung out with Domenico Dolce and Stefano Gabbana, and met up with former Spice Girls manager Simon Fuller to watch AC Milan play Udinese. If you've loved following David and Victoria this year, you've still got time to vote for them as your favourite male and favourite female British stars of 2008! 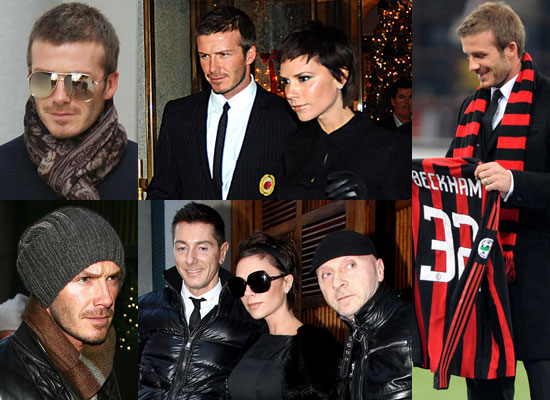 To see loads more pictures of the Beckhams in Milan, just read more.

David BeckhamVictoria Beckham
Around The Web

Makeup
We Tried All of Victoria Beckham's Posh Lipstick Shades, and Our Inner Spice Girl Is Thriving
by Sophia Panych 08/10