David Tennant and John Barrowman attended a Comic-Con panel for Doctor Who in San Diego yesterday, as it's airing in the US on BBC America — the panel also included stars of Being Human and reflected on Torchwood too. It was one of David's last duties as the Doctor, as Matt Smith has already begun filming the new series as the brand new version of the titular character. 4000 people went to the event, where the fans screamed loud for John, and even louder for David! While nothing groundbreaking was revealed, the day before John and David got some fans a fluster at a screening they were introducing, when they kissed, leading John to fake a dramatic faint much to the amusement of everyone there. Check out the kiss under the cut, and then read all of Sugar's coverage of Comic-Con 2009! 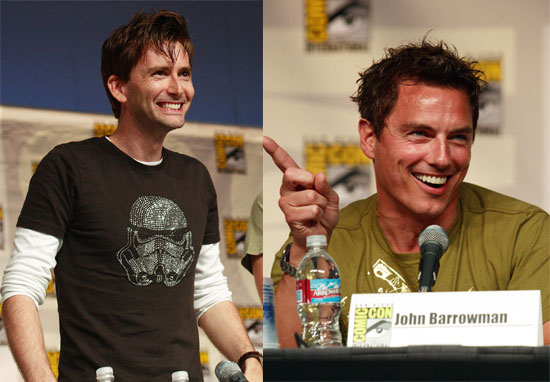 To see more photos of David, John and Russell, as well as a video of David and John kissing, just read more.