Tonight's National Television Awards were held at London's O2 Arena, and we've already taken a look at all the men and women on the red carpet. Ant and Dec shared a long hug as they accepted the first award of the night for Best Entertainment Programme on behalf of Ant & Dec's Saturday Night Takeaway, James Corden started his acceptance speech for Gavin and Stacey with some Vanilla Ice lyrics. The man himself took to the stage later with John & Edward in a rather special performance. The X Factor crew took a while to get to the stage to accept their award, with the theme tune being played over and over, and Sarah Brown presented the award for Most Popular Drama Performance to David Tennant! Check out all the winners under the cut! 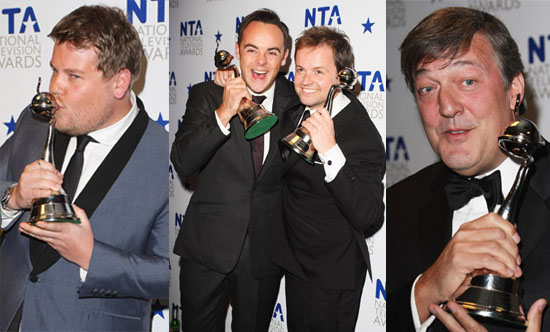 To see the full list of winners, plus lots of backstage photos, just read more.