Alexandra Burke's 21st birthday party at London's Nobu Berkeley Square last night was quite the X Factor reunion, with partygoers including Alex's fellow 2008 contestants Rachel Hylton and JLS's Oritse Williams, JB Gill, Marvin Humes and Aston Merrygold. There was no sign of Marvin's flirting partner Pixie Lott, but the gang were joined by Myleene Klass in a blue dress and red nails, and Tinchy Stryder who was back in London after V Festival. Alex was treated to awesome presents from The X Factor judges too, including a trip to the Seychelles from Cheryl Cole, a Chanel handbag from Simon Cowell and a Tabitha bag from Dannii Minogue. What a lucky birthday girl! As JLS have been warned by their management to curb their spending, I expect the boys weren't able to splash out quite as much as those judges. 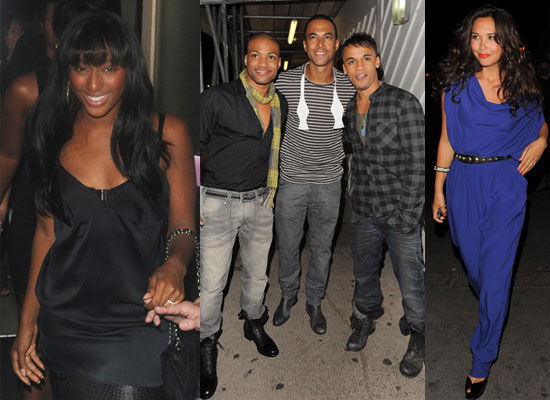 To see more pictures of Alex and her partying pals, just read more.