The stars were out to see all the winners at the People's Choice Awards in Hollywood last night. While some of the stars missed the red carpet, they were all inside to take part in the show and hang out backstage. Nicole Kidman cuddled up with her man Keith Urban backstage, while Sacha Baron Cohen presented Johnny Depp with an award and had a chat afterwards. Hugh Laurie and Taylor Swift were chuffed with their wins, while Taylor Lautner and Kellan Lutz brought some Twilight-y goodness to the ceremony! Nicole and Hugh chatted to Carrie Underwood, Gossip Girl's Kelly Rutherford hung out backstage and Ellen DeGeneres hung out with Sandra Bullock and Ryan Reynolds. What fun! 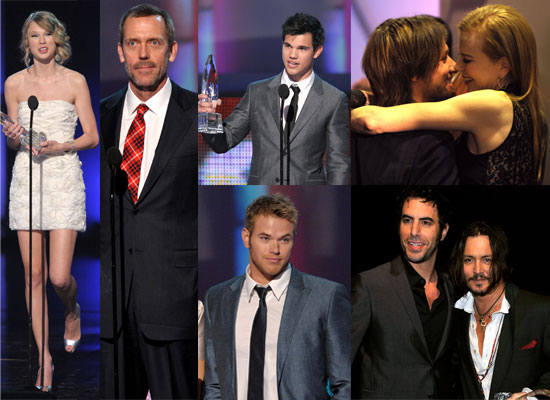 To see many more fun photos of all the celebs, just read more