The red carpet at last night's Golden Globe Awards in LA was packed with lovely ladies. Whether they went neutral, stood out in colour, or stayed safe with black, they all made a statement before the show. Best actress nominee Michelle Williams chose a playful Valentino and Glee's Dianna Agron went with a strapless nude J. Mendel and simple makeup. Anne Hathaway was a standout in a structured Armani gown while Sandra Bullock and Scarlett Johansson both chose sparkly dresses for the big event. Leighton Meester rounded out the night's sandblasted hue trend in a ruched Burberry. 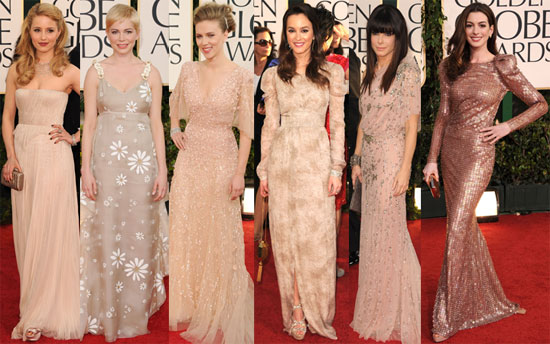 Things took a turn for the bright when Mad Men's January Jones and Christina Hendricks made their entrance in daring red dresses. Lea Michele and winner Claire Danes followed suit in shades of pink while Emma Stone was radiant in a peach Calvin Klein sheath that landed her among the night's best dressed women. Mum-to-be Natalie Portman showed off her strapless Viktor and Rolf when she took the stage to accept the award for best actress. 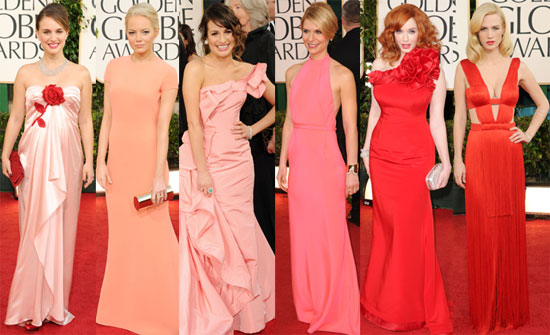 Angelina Jolie led the group of gals who wore green in a sequinned Versace and had the night's hottest accessory, Brad Pitt, on her arm. Black Swan nominee Mila Kunis, Catherine Zeta-Jones, and Elisabeth Moss all followed suit in similarly hued gowns while The Fighter's Amy Adams separated herself from the pack in navy blue. Best supporting actress winner Jane Lynch wore a black halter for her walk down the red carpet and Halle Berry rounded out the gorgeous ladies in a daring Nina Ricci mini. Check out all of the hottest red carpet looks in fashion and beauty with Fab and Bella's love it or hate it polls! 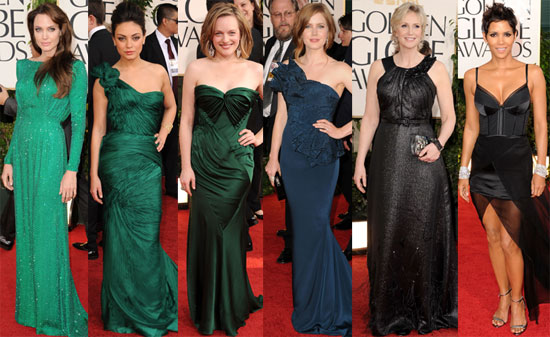 To see more from the carpet, just read more.