Fresh off a long day of panels, the stars of ABC and Disney kept the TCA party going on Sunday at the Beverly Hilton. Matthew Perry cracked Buzz up at the Q & A session, after which he mingled with Busy Philipps and his new costar Andrea Anders. Cougar Town's Josh Hopkins revealed that Jennifer Aniston will definitely be guest starring in an episode early on in season two! My Generation's Mehcad Brooks spoke at length about how much this role means to him and while he's lagged on watching, he still has lots of love for True Blood. 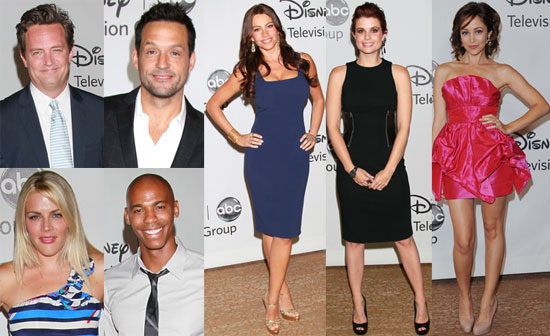 Joanna Garcia looked hot in her Michael Kors dress and her beautiful engagement ring completed the look — stay tuned for Pop US's exclusive interview with her! Autumn Reeser and Julie Benz were both sporting nude Brian Atwood pumps, which was Autumn's first expensive shoe purchase at her No Ordinary Family costar Julie's suggestion. The cast of Modern Family graciously accepted all the praise for their hit series as they gear up for the Emmys later this month. Follow all the updates on Pop US and Buzz's Twitter!