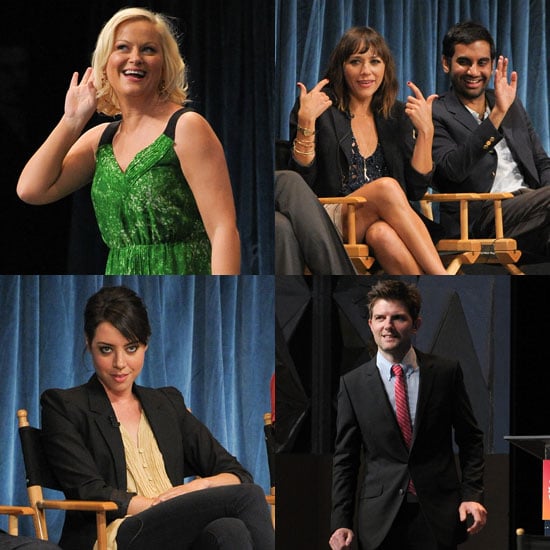 Amy Poehler dressed up in green Wednesday to attend a panel for her show Parks and Recreation at LA's Paley Center For Media. Rashida is back in California after a quick press tour in NYC to chat about life at the fictional Pawnee Parks Department with her fellow EW cover stars like Aziz Ansari, Nick Offerman, and Aubrey Plaza, who just nabbed another comedy role opposite Andy Samberg and Bill Hader. The gang revealed that Rob Lowe isn't going anywhere just yet despite rumours of him replacing Charlie Sheen on Two and a Half Men, and Adam Scott, who joined the show at the same time, will likely stick around too. Amy had a few words to say about the burgeoning romance between Adam's character Ben and her Leslie. Amy commented, "They're very evenly matched. Leslie's like a single mother and Pawnee is her kid. And if Ben starts to like my kid. . . I'll have sex with him." Aziz, meanwhile, shared about his ideal guest star: Usher. He said, "I secretly want Usher to play my brother. . . [with his entrance having him] drop down from the ceiling."