After all the fun of the red carpet the celebrities took their seats for the BAFTA TV Awards tonight. Simon Cowell celebrated his special award amongst the winners, and fooled around in the press room with Jackie St Claire, Amanda Holden and Ant and Dec. The Georgie duo won entertainment performance and picked up awards for Britain's Got Talent. EastEnders was named best continuing drama, and the main acting awards went to Kenneth Branagh, Julie Walters, Matthew Macfadyen and Rebecca Hall. Check out the full list after the jump. 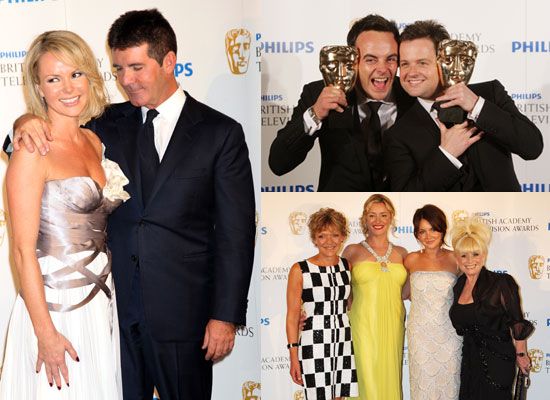 To see the full list of winners plus more pictures from the press room, read more.

Entertainment Performance
Anthony McPartlin & Declan Donnelly I'm A Celebrity... Get Me Out Of Here!

Factual Series
One Born Every Minute

Situation Comedy
The Thick of It