Ben Affleck led the way for the rest of the cast of The Town at the Toronto Film Festival yesterday. He continued to show off his cute chemistry with costars Jeremy Renner and Jon Hamm as the trio of handsome men goofed around together on stage. Blake Lively reunited with the three amigos after their jaunt to Venice while she was busy partying to kick off NYFW and celebrating the Fashion's Night Out she's missing. The movie's red carpet premiere is tonight, when they'll all get even more decked out to show off Ben's second directorial effort. Meanwhile, his brother Casey's first shot behind the lens, I'm Still Here, is out in US cinemas today, though Buzz wasn't impressed by the twisted Joaquin Phoenix documentary. 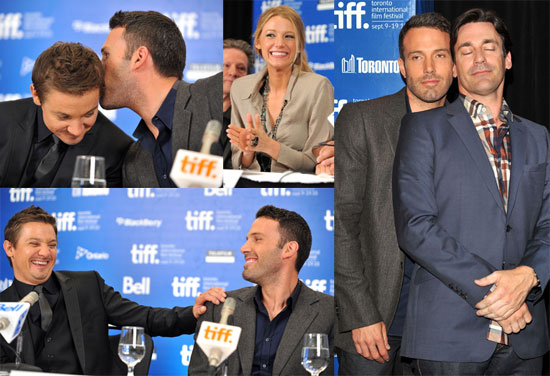 To see more of the cast, just read more.