Neil Patrick Harris, Betty White, John Krasinski and January Jones were some of the presenters who attended the Primetime Emmy Awards rehearsals in LA yesterday. Running Wilde costars Keri Russell and Will Arnett joked around during their practice run and tonight he'll be escorting his wife, Amy Poehler who's going head-to-head against her good friend, 30 Rock's Tina Fey, for lead actress in a comedy. All these famous faces and more will trade their casual wear for black tie as the big show begins. Join PopUS for live streaming coverage from the red carpet — and don't forget to follow them on Twitter for behind the scenes news and photos! 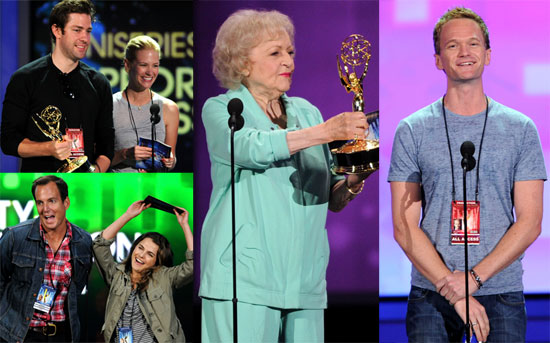 To see more photos from the rehearsals, including Ricky Gervais and others, just read more.

Award Season
Kerry Washington Honours Michael K. Williams at the Emmys: "Your Excellence, Your Artistry Will Endure"
by Monica Sisavat 4 weeks ago