The second annual Fashion's Night Out was an amazing success as stylish shoppers, designers and stars took over Manhattan stores yesterday evening. Sarah Jessica Parker has played a big part in the charitable event since its inception last year and stopped by Fred Leighton as well as joining Victoria Beckham, Nicole Richie and Brian Atwood at Bergdorf Goodman. Leighton Meester posed pretty at Roger Vivier while her Gossip Girl costar Blake Lively was off at the Toronto Film Festival for The Town. Charlize Theron joined the woman behind it all, Anna Wintour, at the Dior boutique while Rachel Bilson showed off her legs at the Sunglasses Hut. SJP and Anna both made multiple stops checking out the parties and fantastic memorable moments, like Michael Kors singing "Defying gravity" and men in full body makeup, throughout the night. Jessica Alba's sparkly mini dress at the Ralph Lauren store is currently your pick for best dressed! 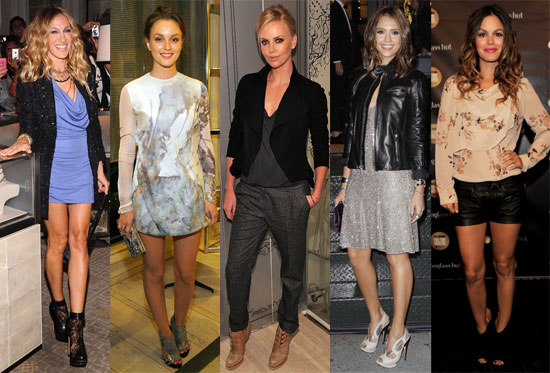 Mary-Kate and Ashley Olsen took a turn behind the cash register at their Elizabeth and James pop up shop in the West Villiage — stop by tomorrow for FabSugar day with bubbles, styling, and more! Nicole Richie sang karaoke to the Spice Girls at the Bergdorf bash and Halle Berry signed copies of her gorgeous Vogue September issue at Ralph Lauren. Halle had a special glow as she was fresh off her romantic time in London with new man Olivier Martinez. Bar Refaeli snapped silly pictures at Armani, Fergie was the guest of honour at Nordstrom and Christina Hendricks had a puppy along for her time at Carolina Herrera. Gwen Stefani debuted her new scent at Sephora. Diane Kruger looked dashing in red as one of the big names at Saks, along with Ed Westwick and Claire Danes. Jennifer Lopez represented at Macys as did Kimora and Neil Patrick Harris. Victoria's Secret hosted its Angels, Heidi Klum and Nina Garcia were at Destination Maternity, Kerry Washington stopped by Tory Burch, and Prada was the spot for Jessica Szohr, Dakota Fanning and Seth Meyers. For all the latest on NYFW check out PopUS, Bella, Fab and Fashionologie! 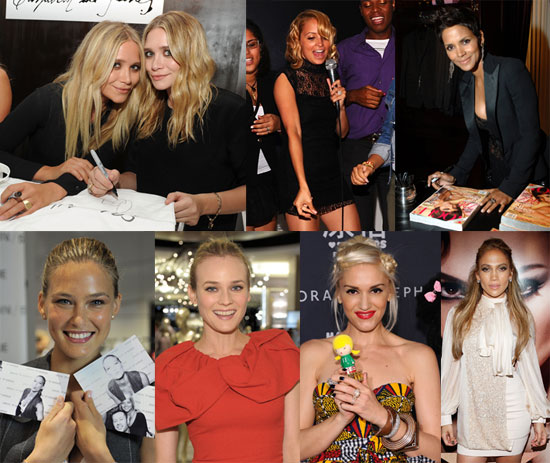