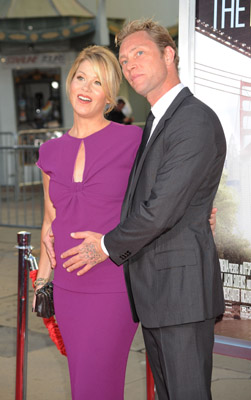 Christina Applegate has given birth to a girl. The actress and her musician fiancé, Martyn LeNoble, welcomed Sadie Grace LeNoble last Thursday in LA. A spokesperson said in a statement: "Mother and daughter are doing great." Sadie weighed 7lbs 8oz.

A few weeks ago, Christina tweeted: "Believe me, I am asking the same question "holy cr*p, is that chick still pregnant?" It takes almost 10 months to make a person FYI".

Christina revealed she was expecting back in July, and was one of several stars to announce a pregnancy last year. We watched her bump grow as she attended her film premiere, took part in charity fundraisers, enjoyed beach time, and relaxed with Martyn.

Congrats to Christina and Martyn!