Denzel Washington and David Beckham laughed together as they watched the Lakers play the Houston Rockets in LA yesterday. Other famous faces in the crowd included Jaden Smith, Kevin Connolly, Leonardo DiCaprio, and Justin Bieber, whose concert the Beckhams attended the night before. While the men enjoyed the game, Victoria was a lady in red at Maria Shriver's Women's Conference in Long Beach alongside Michelle Obama, Jessica Simpson, and Oprah Winfrey. The family look set to stay in the US, as David has ruled out a loan move and the possibility of buying out the final year of his deal with the club, by saying: "I'm going to be in Los Angeles for the rest of my contract. We're all happy here." 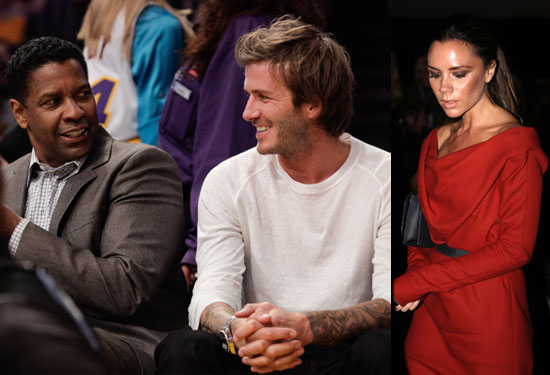