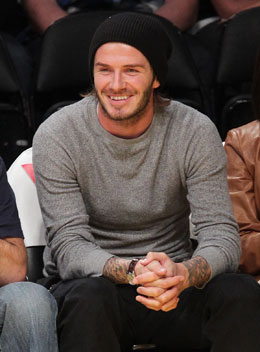 David Beckham was in the starry crowd that watched the Lakers take on the Detroit Pistons in LA yesterday. He might be making the most of his time Stateside, as several Premier League clubs want to sign him on loan in the January transfer window. Spurs have been leading the way, but manager Harry Redknapp has now said their chances are only 50-50.

Reports today claim the Beckhams have enrolled their sons at a school near their Hertfordshire home. If David does sign for an English club, he will have to go back to the US when the MLS season starts again on March 15. There were rumours two years ago that the Beckhams might come home to the UK, but this time it could actually happen. Do you think they'll return?