The stars of CBS, CW and Showtime partied with PopUS and Buzz after a full day at the TCA panels. Ed Westwick was a treat to chat with as he represented the Gossip Girl cast. He was eager to talk about the fate of Chuck Bass and even share his thoughts on Robert Pattinson and Kristen Stewart. The cast of 90210 took a break from their busy Summers to attend as well. AnnaLynne McCord has had a great few months of traveling with her boyfriend Kellan Lutz, but it turns out that Eclipse wasn't her favourite blockbuster of the season — it's a tie between Inception and Iron Man 2 because of their two amazing lead actors! Her costar Matt Lanter has his own Twilight connection after appearing in the spoof Vampires Suck, and he revealed that he read the first of Stephenie Meyers's books "as research." Matt hasn't had the chance to meet Robert Pattinson, but he would love to one day. 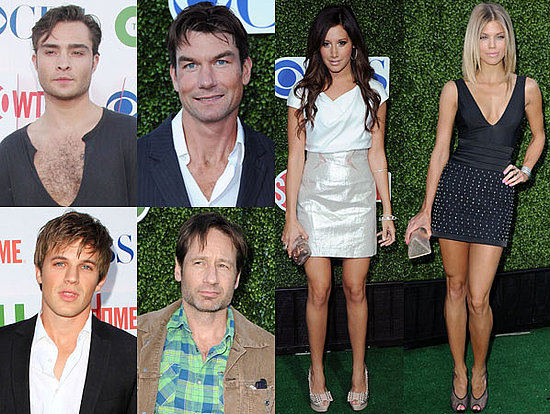 Jerry O'Connell, meanwhile, took a break from promoting The Defenders to gush about his life with the twins and wife, Rebecca Romijn. He says that being a dad of girls is the only way to go! David Duchovny and Ashley Tisdale also turned out for the celebration, and he's busy today with a panel for Californication, as she chats up her new show Hellcats — there's lots more to come, so stay tuned to Buzz on Twitter for updates from the panels!