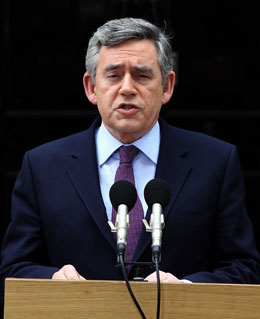 Gordon Brown announced last night he will step down as Labour leader. He explained that as his party had not won an overall majority in the general election, he accepted the result was a judgement on him also, and said:

"I therefore intend to ask the Labour Party to set in train the processes needed for its own leadership election. I would hope that it would be completed in time for the new leader to be in post by the time of the Labour Party conference. I will play no part in that contest, I will back no individual candidate."

Nick Clegg has begun formal negotiations with Labour. It is believed the Lib Dems will form a coalition government with either Labour or the Conservatives.