A whole host of Harry Potter stars joined together for the grand opening of The Wizarding World of Harry Potter in Orlando yesterday. Bonnie Wright represented the girls, and though Emma Watson missed out on the official launch she did get a sneak peek of the theme park. Daniel Radliffe travelled from NYC to Florida for the event, after attending the Tony Awards at the weekend. Rupert Grint had fun performing a Beastie Boys' song with onscreen brother Oliver Phelps: watch video footage after the jump! Tom Felton was fresh off his Best Villain win at the MTV Movie Awards. JK Rowling was also at the park, which the majority of you want to visit, as were Michael Gambon, Warwick Davis, Matthew Lewis, and James Phelps. 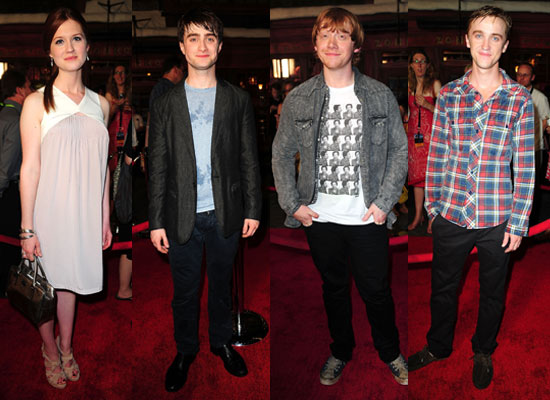 To watch Rupert sing and see more pictures of the cast plus the theme park itself, read more.