The stars of Harry Potter attended a press conference in Orlando yesterday at The Wizarding World of Harry Potter. They were at the grand opening the day before, but were dressed more casually as they chatted to the packed room. Tom Felton, Rupert Grint, Daniel Radcliffe and Bonnie Wright giggled together as they answered questions. Bonnie has links to both this franchise and the Twilight saga, as her fiance Jamie Campbell Bower stars in both. When it comes to her preference, however, she's loyal to her series of movies, saying she chooses "Harry Potter all the way. Since I was [9-years-old]." The actors were joined on stage by costars Warwick Davis, Matthew Lewis, Michael Gambon, and Oliver and James Phelps. 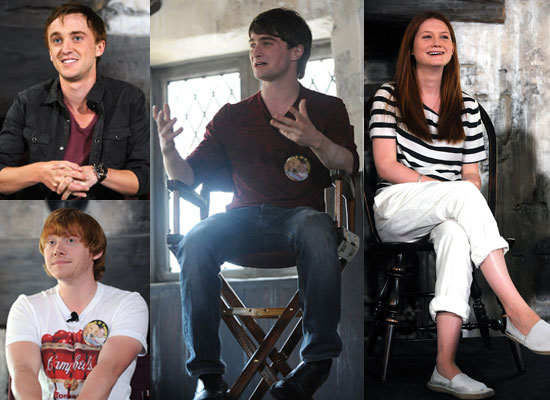 To see more pictures of the gang and the theme park, just read more.