The stars of The King's Speech were joined by their partners for the London Film Festival premiere last night. Geoffrey Rush and Colin Firth got together on the red carpet, and Colin also cuddled up to his wife Livia Giuggioli. Helena Bonham Carter posed for pictures with Tim Burton at the afterparty, and Claire Danes and Hugh Dancy also attended. Helena wore another tartan number following the press conference earlier in the day. She revealed it was a relief to play a queen at the same time as "screamy hooligan" Bellatrix, and her Harry Potter costar Bonnie Wright came to last night's premiere, as did Will Young, Benedict Cumberbatch and Timonthy Spall, who plays Winston Churchill in the must-see movie. 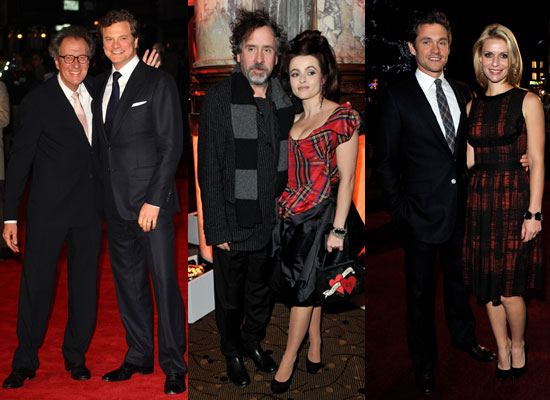