Jennifer Lopez was at Times Square yesterday to unveil the Boys & Girls Clubs of America's new billboard. She was supported by hubby Marc Anthony at the event. Marc will have the spotlight this weekend, though, when he takes the reign as king of the city's Puerto Rican Day parade. The couple are back in Jennifer's home city after a stint in LA, where they attended Sunday's MTV Movie Awards and she helped Tom Cruise steal the show with his hilarious and impressive Les Grossman dance performance. She had nothing but praise for Tom, saying: 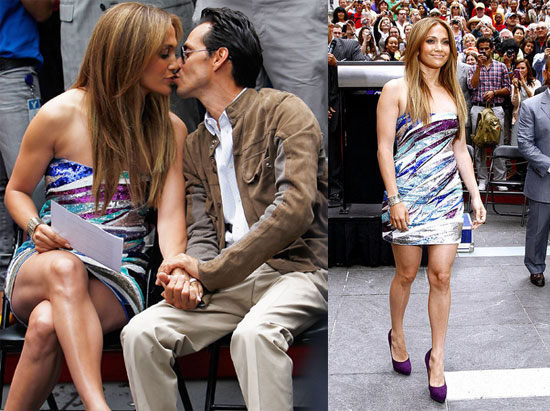 "Working with Tom was amazing! I'm such a hard worker, and I'm kind of intense about my job. It's great to work with someone who is just as intense and passionate and crazy about getting everything right. . . [Tom] called me a month before and said, 'I have this idea. I'm doing this thing for the MTV Movie Awards, and I want it to be a surprise.' I said OK, we'd do a little mash-up of [Ludacris' 'Get Back' and a Lopez's song 'Get Right']. I come out and sing a little and then we dance together. But [I told him] you have to learn this cane dance that I do in the video. . . The thing with that routine is that it is one of the hardest routines. But he did it. He really, really did it. And he did a great job. I was really proud of him."

Celebrity Style
Jennifer Lopez Wore the Ultimate Date-Night Dress on Another Internet-Breaking Outing
by Kelsey Garcia 21 hours ago
PDA
J Lo and Ben Affleck Re-Created Their Famous Yacht PDA, and They Have to Be Trolling Us Now, Right?
by Grayson Gilcrease 1 day ago