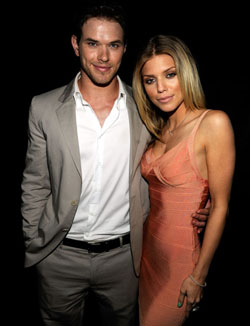 Kellan Lutz and AnnaLynne McCord have reportedly ended their relationship. The Twilight actor and 90210 actress had been dating on and off for nearly two years.

They partied separately over the Halloween weekend, with AnnaLynne at Veuve Clicquot's Yelloween at LAVO in Las Vegas and Kellan at the Borgata in Atlantic City. It is reported that AnnaLynne was holding hands with model Aaron O'Connell.

Kellan has work to keep him busy, and will be back in Louisiana filming Breaking Dawn with his costars like Kristen Stewart.