Kylie Minogue wore a Richard Nicoll dress with Christy Turlington's face on it as she ran errands in London yesterday. Dannii and family are in the UK now too, so the sisters can reunite after being separated by continents. Kylie's appearing on Paul O'Grady's show on Friday, before her single "Get Outta My Way" is released on Monday. She recently revealed her attitude towards the images she sees versus the reality of how she looks, saying: 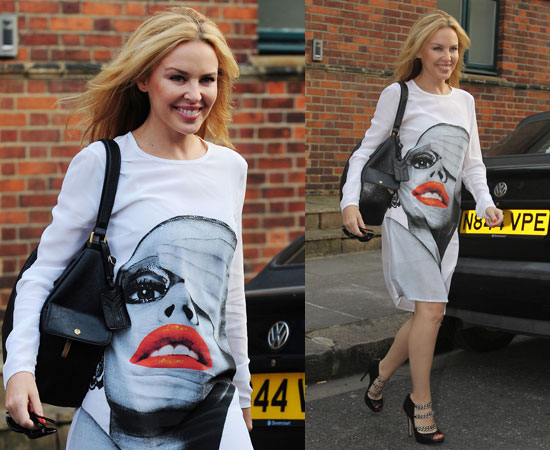 "I want to look as good as the pictures I see in magazines, but it’s not going to happen. This is how it has always been, and this is how it will always be. We are all smart enough human beings to know that the images we see in magazines or on album covers aren’t real. The fact is that we don’t want to see imperfections, we don’t want to see reality."