The 2010 Primetime Emmy Awards are less than a week away, but on Saturday the Creative Arts ceremony took place at the Nokia Theater in LA. Neil Patrick Harris had his man David Burtka on his arm as they celebrated NPH's first two Emmy wins, matching the number of kids they're expecting in October! Ryan Seacrest took home his first ever Emmy for Jamie Oliver's Food Revolution. Christina Hendricks was among the Mad Men representatives, which took home a couple of gongs, and she'll be out with Jon Hamm and the rest of cast this weekend at the primetime ceremony. Kristen Chenoweth hung out with Glee creator Ryan Murphy on the red carpet and looked cute in her blue minidress. Check out the full list of winners, and if you want a closer look at next weekend's ceremony my girl Buzz has details on the top categories! 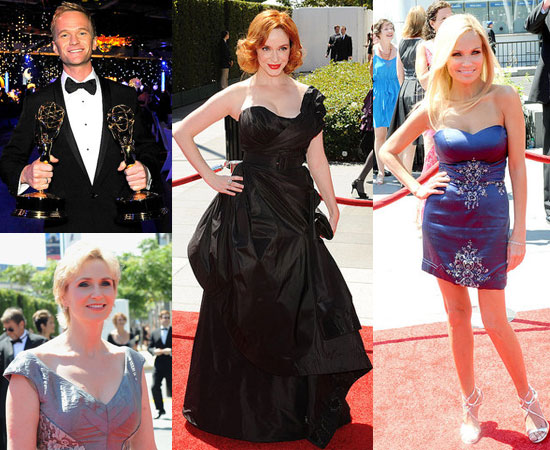 To see lots more from the event including Seth Meyers, Robin Williams, Andy Samberg, Jane Lynch, and many others just read more.

Celebrity Style
The Emmys Are Here, So Naturally, We're Binge-Watching the Red Carpet
by Hannah Weil McKinley 3 weeks ago

Award Season
Seth Rogen Pointed Out the Obvious at the Emmys: "There's Way Too Many of Us in This Little Room"
by Kelsey Garcia 3 weeks ago

Award Season
Kerry Washington Honours Michael K. Williams at the Emmys: "Your Excellence, Your Artistry Will Endure"
by Monica Sisavat 3 weeks ago