Nicole Kidman had husband Keith Urban by her side Thursday for the NYC premiere of Rabbit Hole. In the intense drama, Nicole plays a parent dealing with the loss of a child, and the role is already getting her lots of Oscar buzz. Nicole was asked about the potential for another Academy Award win yesterday, and she said, "You never know and you just hope for the best. I suppose the biggest thing for me is that the film connects with people, because I feel very strongly that the film is special." She has received other accolades so far, starting with a Best Female Lead nod at the Independent Spirit Awards. Nicole was joined on the red carpet by costars Sandra Oh and Aaron Eckhart, who both moved on to the afterparty to pose for funny photos. Jon Hamm also showed his pretty face with girlfriend Jennifer Westfeldt. Nicole and Aaron apparently struck up quite a friendship while working on the movie, and now she's excited to find him a nice lady so he can finally put his bachelor days behind him. 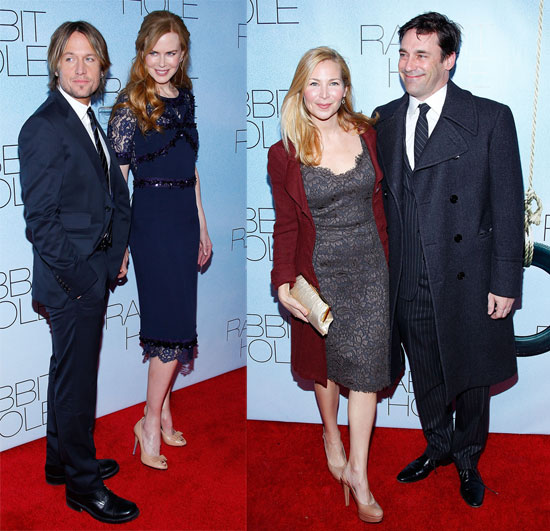 To see more from the red carpet, just read more.