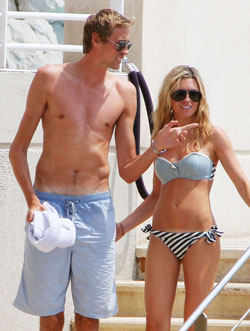 Following rumours, Abbey Clancy and Peter Crouch have officially announced their pregnancy news. Peter said: "Abbey told me she was pregnant but we agreed to keep it private until she was ready to make an announcement." Abbey is 12 weeks gone, and the news was reported yesterday. Peter's solicitor has released a statement saying the footballer has condemned the leak.

The couple got engaged in July 2009, and last month Peter's time with a prostitute was revealed. Abbey told Peter about the baby on July 25, following their PDA-filled holidays in Sardinia and the South of France that month, where Abbey showed off her flat tum in various bikinis. Congrats Peter and Abbey!