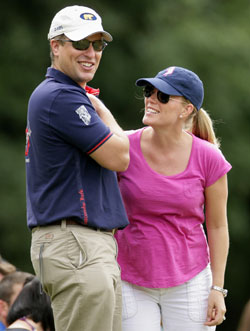 The Queen's grandson Peter Phillips and his wife Autumn have welcomed a baby girl. She was born on Wednesday at Gloucestershire Royal Hospital and weighed 8lbs 8oz. The newborn is the Queen's first great-grandchild, and is 12th in line to the throne. Buckingham Palace released a statement saying:

"The Queen, the Duke of Edinburgh, the Princess Royal, Captain Mark Phillips and Autumn's family have been informed and are delighted with the news."

Peter and Autumn married in Windsor in May 2008. The Phillips have lots to celebrate this festive season, as Peter's sister Zara just announced her engagement to Mike Tindall.

Congratulations to Peter and Autumn!