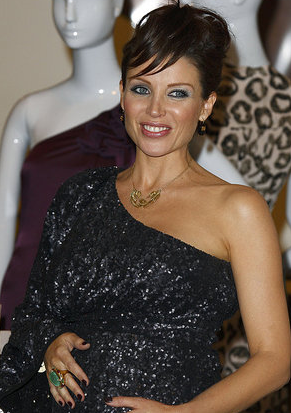 Congratulations to Dannii Minogue and Kris Smith, who reportedly became the proud parents of a baby boy on Monday! They've named their son Ethan Edward Smith.

Dannii and Kris announced the pregnancy back in January, and have been spending time in Australia as they awaited the arrival of their son.

At the Project D clothing line launch Dannii said that it felt like her baby was "moonwalking across" her stomach.

The X Factor will have Dannii back soon, as she's been tweeting about the gang. She's been aware that Simon Cowell, Louis Walsh and Cheryl Cole have been doing auditions with guest judges, and tweeted that "Team Minogue is back! Thrilled to return to #XFactor later this year: judges home & live shows. Wonder which category I'll mentor?"

We wish Cheryl a quick recovery from her illness, and hope that the two of them will be reunited with baby Ethan soon. Congratulations Dannii!