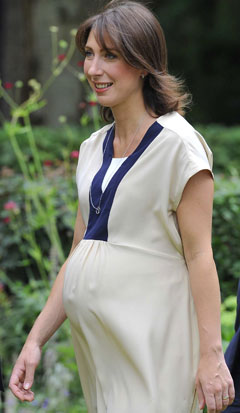 Prime Minister David Cameron and his wife Samantha have called their new baby Florence Rose Endellion. Their daughter was born on Tuesday while the family were on holiday in Cornwall. St Endellion is a village in the north of the county, and David said after the birth: "I think we will have to have something Cornish in the middle". A Downing Street spokesperson said the couple had received congratulations from the Queen, Prince Charles, Gordon and Sarah Brown, Nicolas Sarkozy, and Barack Obama.

On discovering she was pregnant, Samantha stepped down as creative director at Smythson. In August she became the first visibly pregnant woman to be included in Vanity Fair's best dressed list. Samantha and Florence, who wasn't due until next month, are expected to stay in hospital for at least another day.