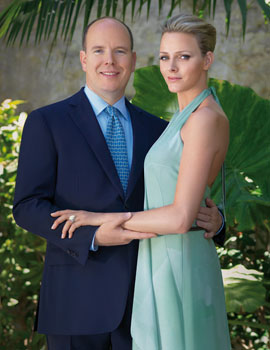 Prince Albert of Monaco and Charlene Wittstock smiled as they announced their engagement at the Palais de Monaco today. The Prince has been dating the South African Olympic swimmer for four years. They met when Charlene, who is 20 years younger than 52-year-old Albert, visited Monaco for a competition.

It's quite the week for royal wedding news, as Swedish Princess Victoria married her personal trainer Daniel Westling in Stockholm at the weekend. Our British royal family have held their own spectacular ceremonies over the years too. No date has been set yet for Albert and Charlene's wedding. Congrats to the happy couple!