David Beckham and Prince William laughed as they chatted with David Cameron in Zurich yesterday. The trio are in Switzerland as ambassadors for England's 2018 bid for the World Cup, ahead of the announcment on Thursday. Becks also took the opportunity to meet with children at a local school and play some footie with them. He stopped over in London on his way from Australia, and took the chance to have dinner with James Corden. David was in Zurich back in May, and has been a vocal supporter of England's bid for a long time, posing with our previous Prime Minister in May 2009. It looks like David and Wills are good friends, following their World Cup fun in South Africa this Summer. They get on so well, Becks has reportedly been invited to William and Kate Middleton's wedding next April. 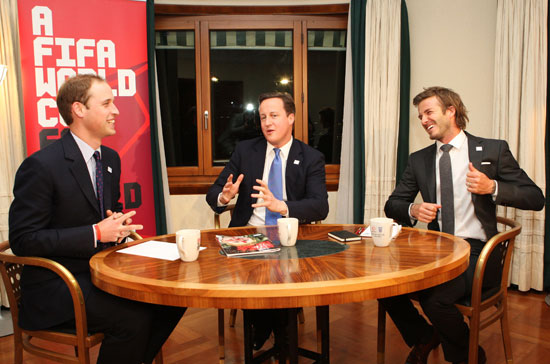