As expected, Robbie Williams and Ayda Field got married yesterday in front of 75 guests. They abandoned plans to marry on Santa Catalina island, and instead married at his Beverly Hills home, with the ceremony beginning at 5pm. Ayda was spotted having photos taken in her wedding dress, while Robbie was congratulated by his best friend Jonathan Wilkes. Robbie's parents Jan and Pete attended, as did Ayda's mum, Gwen. 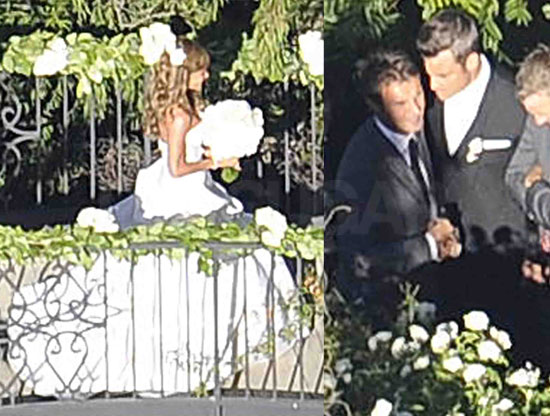 The couple reportedly chose a theme of white and silver for the ceremony and Ayda's hair was styled by Jessica Simpson's hairdresser Ken Paves. The wedding cake was made by Vanilla Bake Shop in Santa Monica, and was chocolate with sea salt and baklava to represent the bride's Turkish heritage.

To find out about the pre-nup and their plans after the ceremony, just read more.

There's apparently a £80million pre-nup in place, but Robbie and Ayda will now head off on their honeymoon, before returning as Robbie prepares to release his duet with Gary Barlow, "Shame". He'll turn on the Blackpool illuminations on September 3, a place that holds special memories for him and Ayda after he took her there for a private visit in 2008. On September 12 he'll headline charity concert Help For Heroes, before reuniting with Take That. Though the boys didn't attend due to the short notice of the ceremony, they reportedly sent messages to be read out at the reception.

Celebrity Style
Paris Hilton Looked Straight Out of a Fairytale in Her Tulle, Flower-Embroidered Wedding Dress
by Victoria Messina 3 weeks ago

Celebrity Style
Britney Spears Will Be a Versace Bride — the 2000s Came Calling!
by Sarah Wasilak 3 weeks ago

Wedding
Malala Yousafzai Is Married: "Today Marks a Precious Day in My Life"
by Njera Perkins 4 weeks ago