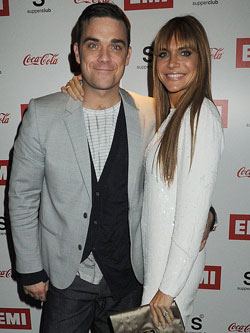 Robbie Williams is reportedly marrying Ayda Field tomorrow. The couple, who met in 2006, will wed on the island of Santa Catalina, off the Californian coast. They told family and friends the date just last week, and Robbie's BFF Jonathan Wilkes flew out to LA yesterday. Robbie's mum Jan and dad Pete Conway are also in the US for the small ceremony. His newly reunited Take That band mates are all on pre-planned holidays and won't be attending. Back in November, Rob propsed to Ayda live on air during a radio show in Sydney, but then wrote a message on his website saying they weren't engaged. The newlyweds will honeymoon for two weeks, before Robbie returns to the UK to get promoting Take That's new single. Congrats to Robbie and Ayda!

Celebrity Style
Paris Hilton Looked Straight Out of a Fairytale in Her Tulle, Flower-Embroidered Wedding Dress
by Victoria Messina 2 weeks ago

Celebrity Style
Britney Spears Will Be a Versace Bride — the 2000s Came Calling!
by Sarah Wasilak 2 weeks ago

Wedding
Malala Yousafzai Is Married: "Today Marks a Precious Day in My Life"
by Njera Perkins 2 weeks ago