Kristen Stewart and Robert Pattinson were joined by several Eclipse costars for an appearance on Jimmy Kimmel Live in LA yesterday. Taylor Lautner represented the wolfpack, Dakota Fanning brought the Volturi to the stage, Bryce Dallas Howard and Xavier Samuel were together, and the Cullens were represented by Ashley Greene, Nikki Reed, Peter Facinelli and Elizabeth Reaser. The gang had a busy weekend, where Robert and Kristen flirted at a fan event and talked about each other at a press conference, while the Cullens took time out on a balcony during their press duties. Robert chatted about marriage on The Today Show, and revealed to Nightline the best part of a relationship is that moment just before sex: check out the interview after the jump! 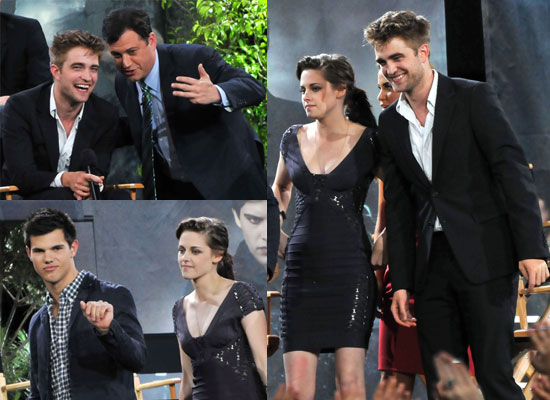 To watch Rob on Nightline and see loads more of the cast, read more.