After the stars walked the red carpet at the MTV Movie Awards they sat down for an awesome show. New Moon scooped five gongs and Robert, Kristen and Taylor took to the stage to introduce a new Eclipse scene. Their costar Anna Kendrick was named Breakout Star for Up In the Air and Amanda Seyfried collected her Scared-As-S**t Performance gong for Jennifer's Body. Highlights included Tom Cruise as Les Grossman dancing with J Lo, and Rob and Kristen kissing. Sandra Bullock was given the Generation Award by Bradley Cooper, Betty White, and Scarlett Johansson. She kissed Scarlett and gave a funny speech. 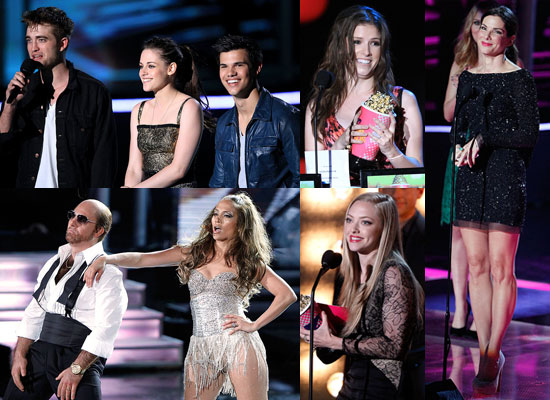 Knight and Day costars Tom Cruise and Cameron Diaz gave the Twilight crew the Best Movie award, and Peter Facinelli's swearing caused a stir. He posed with Nikki Reed and Elizabeth Reaser in the winners room, as well as many more stars from Eclipse. Tom Felton picked up Best Villain for his role as Draco in Harry Potter, and we were treated to a new trailer for Harry Potter and the Deathly Hallows. Check out the full list of winners after the jump. 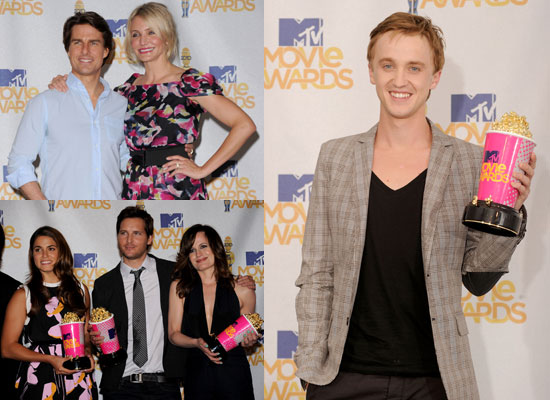 To see the full list of winners plus more from the show, just read more.

BEST BREAKOUT STAR
Anna Kendrick, Up in the Air