Last night I was lucky enough to see Russell Brand at Hackney Empire to promote My Booky Wook 2, his second autobiography. During the first half of the evening Russell read extracts from his book, and in the second half his partner in crime Jonathan Ross came on to chat. Jonathan skimmed over Russell's recent arrest and asked how on earth he'd broached some of the subjects in the book with fiancee Katy Perry, and Russell explained that as he wrote the second half of the book he read it out to her, including memorable anecdotes about a potential threesome and a bulldog, and one about breast milk! 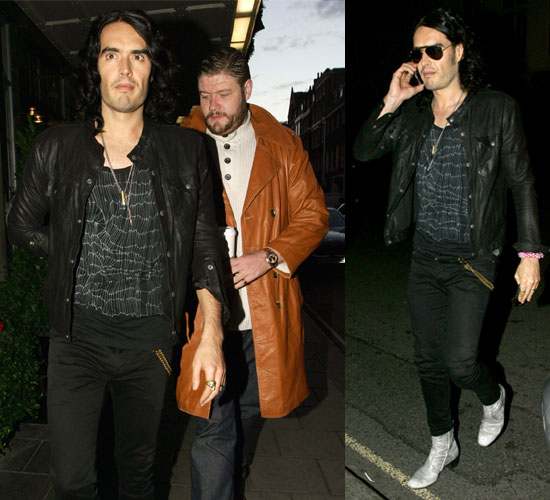 Russell talked about his life since fame hit and said that he can go out with Katy and not be noticed if he wears his disguise and Katy doesn't wear "so much f*cking makeup" or swimsuits! Of course "Manuelgate" came up briefly a few times as Russell and Jonathan were reunited in front of an audience, that included Morrissey and David Baddiel. Jonathan shared that Tom Cruise told him he thought Russell was going to be a star — though he couldn't remember his name — and they polled the audience on whether he should grow the beard back. It was a unanimous yes, and Russell said he'd get to work on it — while saying Jonathan's beard made him look like Guy Fawkes. What a fab night!