Ryan Gosling and Michelle Williams, wearing an Azzaro mini-dress, gazed into each others eyes and greeted the crowd at a special Museum of Modern Art screening of Blue Valentine in NYC last night. The adorable twosome were joined by their onscreen daughter Faith Wladyka, who got to get glammed up with Ryan and Michelle in Cannes earlier this year, as well as their director Derek Cianfrance. The evening wasn't only for the cast, however, since Blake Lively was spotted quietly sneaking in to check out the film. The Gossip Girl star is no stranger to the city's red carpets, though this appearance will likely bring back up the rumors of a romance between her and Ryan. The two were spied on a Disneyland ice cream date earlier in the Fall, but at that point her rep said they were just friends. Since then, Blake split with Penn Badgley, while Gosling is still swinging single. He's been logging lots of time posing with Michelle Williams to promote their unexpectedly controversial love story and his eloquence about the NC-17 rating is one of the things that makes him so sexy. 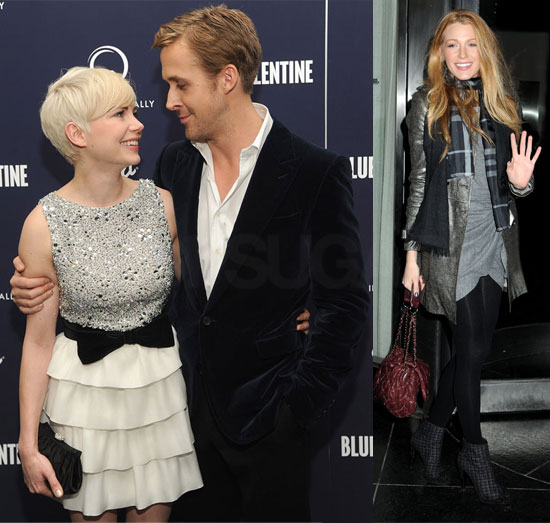