On Sunday night all five members of Take That left their London hotel for an evening out. Gary Barlow and his wife Dawn looked smart and smiley, Howard Donald also had a big grin on his face as he left with his girlfriend, while Robbie Williams wore a scruffy jumper and cap to step out with his wife Ayda. Mark and Jason were also in attendance for the night out celebrating their number one album Progress, after performing live on Children in Need on Friday night. It was the first time that they'd ever had the chance to perform "Never Forget" as a five piece — Robbie sang on the original recording, but had left the band by the time they promoted it as a single — check it out under the cut! The chaps will also appear on Fearne Cotton's Live Lounge between 10am and 12.45 today. 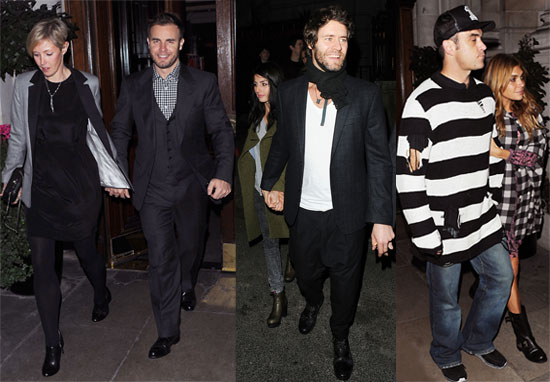 To see them perform "Never Forget" on Children in Need, just read more.