Simon Cowell worked on his birthday yesterday, a far cry from last year's big party, so Cheryl Cole surprised him by arranging for a group serenade him wearing special tshirts! They were joined by their fellow X Factor judges Louis Walsh and Dannii Minogue, as well as host Dermot O'Leary and helper Sinitta. The final 12 contestants plus mystery wildcards were also there, with Cheryl's three girls Cher Lloyd, Katie Waissel, and Rebecca Ferguson together again. Cheryl, who was toting a must-have Mulberry bag, has reportedly pleaded with producers to tell the truth about Gamu Nhengu, following speculation about why she wasn't chosen. Simon's groups F.Y.D. and One Direction were also spotted, as were Dannii's boys Matt Cardle, Aiden Grimshaw and Nicolo Festa, and Louis's overs Mary Byrne and Storm Lee. 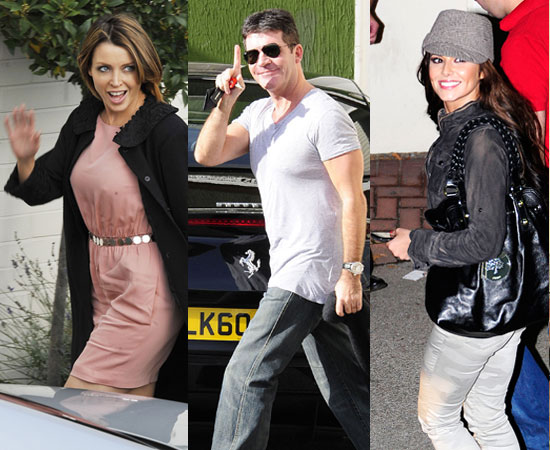 To see more pictures of the judges and contestants, read more.