Zach Galifianakis toted his adorable French Bulldog costar on the Due Date premiere red carpet in LA this week. The twosome posed with director Todd Phillips, Michelle Monaghan, and Robert Downey Jr. on their way in to show off the buddy comedy. It's Todd's highly anticipated followup to The Hangover, and the crew from that movie, which also includes Zach, recently reunited to start shooting the sequel. There's already been a bit of controversy surrounding The Hangover 2, and Mel Gibson is reportedly furious over losing his cameo, which was given to Liam Neeson instead. Zach was rumored to be adamantly opposed to Gibson's appearance, and the comedic actor has more clout than ever these days. He recently signed on for The Muppet Movie, and his fantastic TV series, Bored to Death, was renewed for a third season. RDJ, meanwhile, has been in London getting to work on the Sherlock Holmes followup alongside Jude Law and Guy Ritchie. 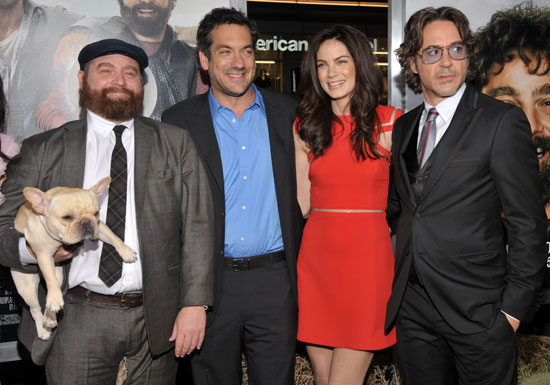