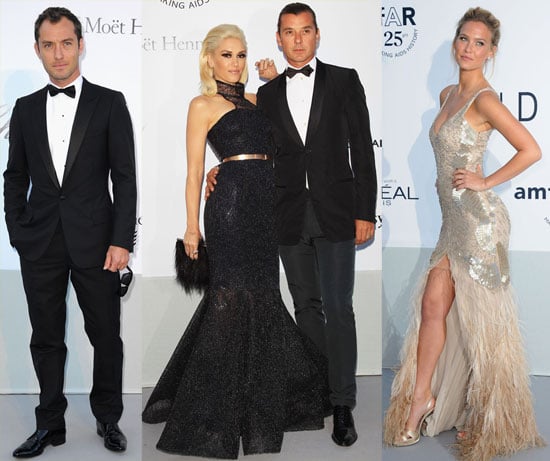 Today's amfAR Cinema Against AIDS Gala in Antibes drew a glamorous crowd of stars. The event, held during the nearby Cannes Film Festival, was attended by judging panel members Jude Law and Uma Thurman, as well as celebrities from the worlds of music and fashion. Kanye West, Gwen Stefani, Gavin Rossdale, and Janet Jackson were some of the recording artists who made their way down the white carpet. Supermodels Doutzen Kroes, Bar Refaeli, and Naomi Campbell joined designers like Karl Lagerfeld and amfAR chair Kenneth Cole at the fundraiser. This evening's swanky fête was one of several that have taken place during the annual cinema celebration. Earlier this week, a Chopard soirée drew many of the same famous faces, including Bar and Jude. Since the festival first kicked off on May 11, the stars have been keeping busy on the gala circuit, relaxing on the water on board mega yachts owned by the likes of Steven Spielberg and Microsoft's Paul Allen, and walking the red carpets at movie premieres like Brad Pitt's The Tree of Life, which debuted on Monday.