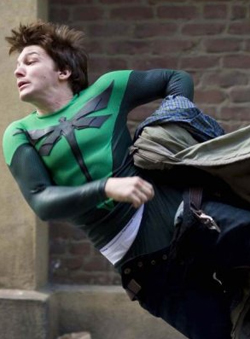 I have to say I'm pretty wary of any film with "movie" at the end of it, and so I am approaching the idea of Superhero Movie (out June 6 in the UK) with trepidation.

This one is from David Zucker and features Leslie Nielsen in a large role which gave me hopes it might hark back to The Naked Gun golden days... it also seems to be playing to a younger audience than the "Scary" movies – it has a 12A certificate in the UK and stars Drake Bell who's best known from Nickelodeon series Drake & Josh (alongside The Wackness's Josh Peck) as well as his enjoyably McFly-esque albums.

Other familiar faces include Marion Ross (who Buzz interviewed recently), Jeffrey Tambor (Arrested Development) and one of the best Tom Cruise impersonators I have ever seen. But I'm still not hyped for the film, I don't think it's possible to be hyped for anything that consists of a whole load of spoofs of other, better, films. But anyway, watch the trailer and let me know what you think.