We're in this weird stage at the moment TV-wise. There's a whole flock of new shows slowly starting over here, that have been running for a while pre-Writers' Strike in the US, so we've heard little bits about them but haven't had the chance to watch them in full yet. Earlier this week I mentioned the lovely Pushing Daisies to you, and now I'm going to introduce Dirty Sexy Money. And let me tell you, it's an absolutely delicious show starting Friday at 9pm on Channel 4! 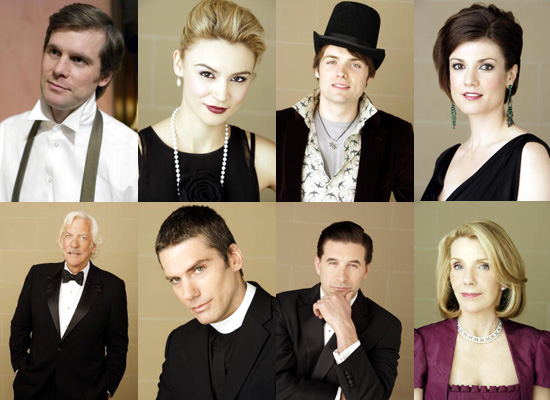 Full of double-crossing family members with a central mystery running through the centre, the show focuses on Nick George (played by yummy Six Feet Under star Peter Krause) who has to take over as family lawyer to the infamous Darlings when his father is killed in a mysterious plane crash.

For more info and photos, as well as a preview, just read more

Nick pretty much lost out on his own childhood with his father as his Dad was always clearing up the Darlings' messes instead of spending time with him, so, as you can imagine, there's a little resentment there. Still, Tripp Darling (Donald Sutherland) offers him what he wants, so he says yes. The family problems include freeloading spouses, illegal immigrants and a relationship with a transvestite hooker. And that's just the beginning. Here's a little taste of the pilot:

The cast is awesome, from Donald and Peter to Samaire Armstrong (The OC) as a spoiled Paris Hilton-alike. But my favourite characters are Reverend Brian Darling (Glenn Fitzgerald) who's a hilariously mean and sulky vicar, and kooky Karen Darling (Natalie Zea) who has claims on the married Nick as her first love, telling her most recent husband, "Nick deflowered me...". Brilliant.

I would highly recommend you watch the show tomorrow night, and give it a few episodes to get into it. I love it more and more with each episode I see, and you won't believe some of the things the family get up to. It will definitely satisfy your slightly voyeuristic side, that's for sure.

Here's a trailer to get you in the mood –